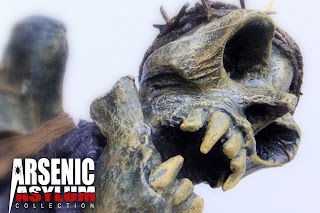 I really like characters with no eyes, it gives them a sense of mystery. This creature features barbed wire wrapped around his skull which may explain the screaming, gaping mouth. Fangs round out the look, something fierce and aggressive.


Inmate #446 was confined to Arsenic Asylum in 1940. Doctors were perplexed by Beetle Snot’s level of pain tolerance which caused them to push the limits and expose #446 to excruciatingly painful forms of torture.
Arsenic Asylum Characters are made from papier mache and miscellaneous recycled materials. Each character is unique and created by hand.
The Beetle Snot was designed to be used as a hanging decoration and measures roughly 24 inches from the top of the head to the bottom of the cape.
The cape is made from recycled fabric which has been distressed, dyed, painted and layered with painted cheesecloth.
A wire loop is embedded in the top of the skull to allow #446 to be suspended from a hook or cord.
Arsenic Asylum Characters are designed for interior use only and should be kept in a dry environment. The Beetle Snot weights approximately two pounds.
Visit www.arsenicasylum.com for the dark and horrifying history of Arsenic Asylum.
Available at the STOLLOWEEN Shop on Etsy. 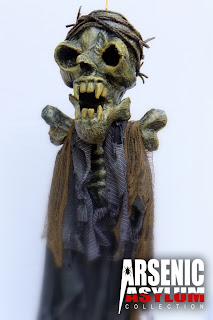 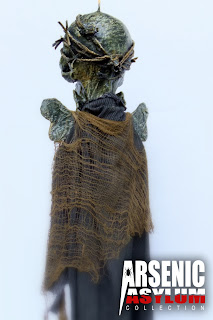