Here are a few tidbits of information concerning the construction of “Buster Gravesley” that did not make it into the project tutorial.

One RockBand box is enough to build a four foot high coffin frame. 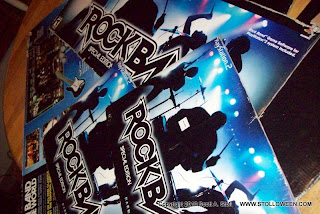 Once the ribs were attached to the spinal cord, additional tubes of newspaper were used to make the collar bones. The collar bones are not anatomically accurate, like most of my work I use diagrams for reference but freely deviate from reality. 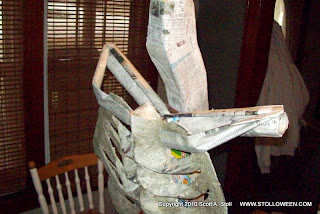 The forearms (radius and ulna) were created by coating a rolled tube of newpaper with papier mache strips, allowing to dry, then cutting holes to create the look of two bones. Also, to support the newspaper while being papier mached the inside of the tube was filled with crumpled newspaper to prevent collapse. 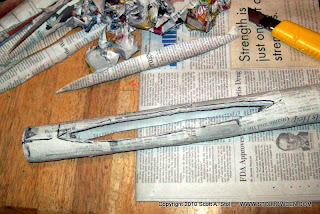 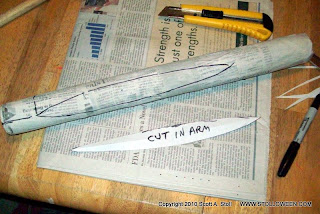 The first eyeball created for buster was red with veins created from red thread. The result was sort of cool but I did not feel it was right for this project. 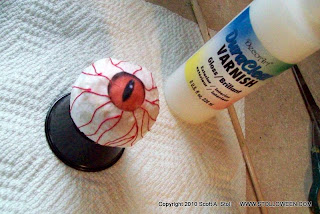 The coffin was made using 44 individual wood planks each cut from cardboard, strip mached, textured and numbered. 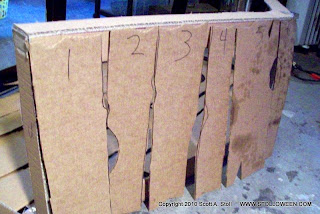 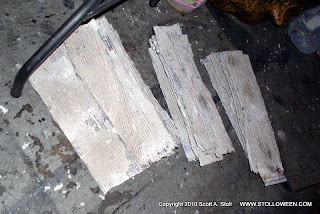 Posted by STOLLOWEEN at 9:26 AM

Beautiful prop! Could you post a tutorial (maybe a YouTube video) of how you do your plastic bag corpsing technique? I can't visualize what you're doing but it looks great!

The plastic corpsing technique was shared by HauntForum member SpookySam and his 2009 $20 prop challenge....

here's the link to his work.

Sam gets the credit for this technique. Sam tied bags to the skeleton then melted with a heat gun...I used hot glue to tack the bags to the papier mache prop then used the head gun to shrink and shrivel the bags until I got the desired texture/effect. Quite simple but requires some experimentation.