Everything I Know About ....

This statement may be stretching the truth but it does have some validity.

I posted a while back about Project Runway and how it is one of the few television shows that I watch every week, I love the display of creativity and problem solving process.

During the last couple of months I have found myself hearing Project Runway voices in my head.

Don’t be alarmed I hear voices all the time but in this instance the voices are those of Michael Kors, Nina Garcia, Heidi Klum and Tim Gunn.

If you don’t watch the show these are the judges, host and mentor for the competing designers.

Once you are done laughing I will continue.

During critiques the judges use several phrases again and again and these phrases repeat themselves in my brain as I work, they are: “effortless”, “overworked”, “editorial” and “point of view”.

What does that mean?

In the world of props I think it means that the piece speaks volumes without regard to the medium or techniques used.

The medium is invisible and not relevant; it works no matter how it was made. In my opinion my most effortless piece is Buster Gravesley, this prop came together without any struggle and does not say papier mache when viewed. 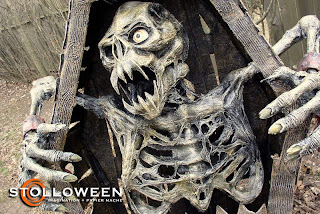 My papier mache “Digger” prop made in 1992 is not effortless; you can see the struggle that went into trying to make paper and glue into a skeletal gravedigger character. 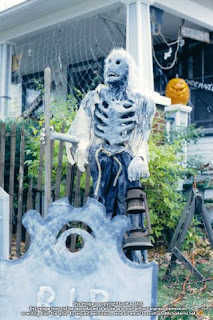 Guilty as charged, my recent collection of tortured pumpkins contains a degree of being overworked. 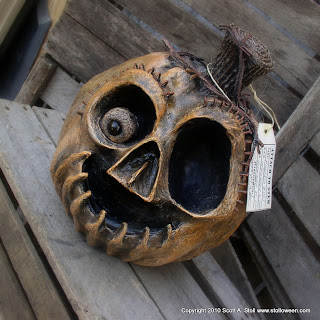 Editorial and Point of View. These two terms are very similar in my mind; does the piece speak for you?

Is the prop really saying anything about you as the designer?

I think that Gourdon Rotsworth displays my strongest editorial. This is what I think an undead pumpkin groundbreaker looks like.

There was no struggle in the design and this is what came out without any hesitation. 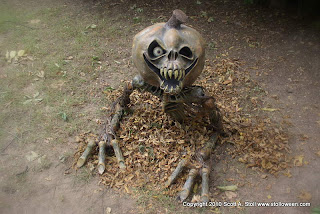 A couple of gargoyles I made for a papier mache workshop represents what I think is work that has no point of view.

They were made because they had to be made and really don’t express a lot of my style.

They are stripped down generic versions of a gargoyle and really lack a lot of punch because they have no strong point of view. 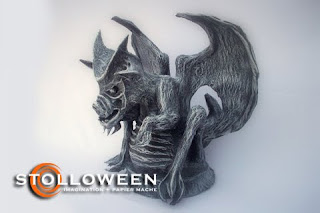 Thanks to Michael, Nina, Heidi and Tim for giving me something to think about during the long stretches of working with papier mache.

Love your show and I heed your advice…hopefully you are making me a better prop builder or you are just making me a blogger full of shit.

Posted by STOLLOWEEN at 8:52 PM